(CNN)Golden State Warriors forward Andrew Wiggins has said he felt like he had no choice but to get the Covid-19 vaccine.

Wiggins told NBC Sports in March he wasn’t getting vaccinated unless he was forced to. He applied for a religious exemption, but the NBA denied that request in September.
However, Warriors head coach Steve Kerr confirmed on Sunday that Wiggins had received the vaccine. And speaking for the first time since getting vaccinated, the Canadian basketball player said he felt like he had to do so to be able to play for his team.
“I feel like the only options [were] to get vaccinated or not play in the NBA,” Wiggins said after the Warriors’ 121-107 preseason opener win at the Portland Trail Blazers on Monday night.
“It was a tough decision. Hopefully, it works out in the long run and in 10 years I’m still healthy.”
In September, the NBA warned the Warriors along with the New York Knicks and Brooklyn Nets that new Covid-19 policies set by local governments will prohibit any unvaccinated player from playing in home games in New York City and San Francisco.
And though 90% of the league is vaccinated, according to a CNN source, there are still a few holdouts — and it could cost them.
The NBA announced in September that unvaccinated players who do not comply with local vaccination mandates will not be paid for the games they miss.
“It feels good to play, but getting vaccinated, that’s going to be something that stays in my mind for a long time,” he said. “It’s not something I wanted to do, but kind of forced to.”
The NBA pointed out that it was local San Francisco mandate requiring players to be vaccinated in order to play games in indoor stadiums in the city. 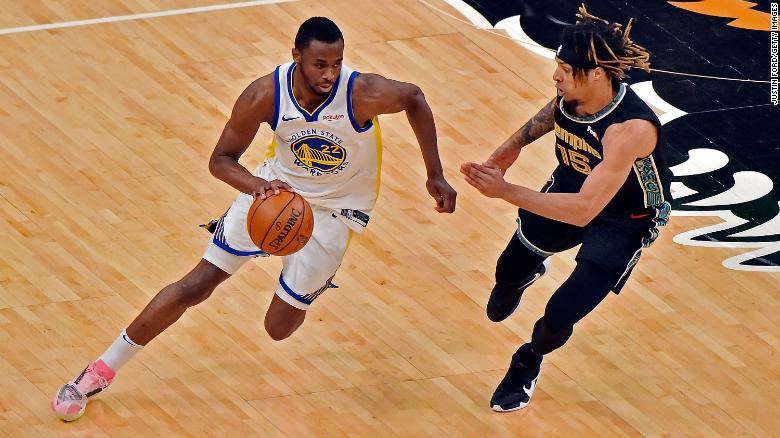 Wiggins handles the ball against Brandon Clarke of the Memphis Grizzlies during the second half of their game at FedExForum.
Wiggins, who received the one-dose Johnson & Johnson shot, said he doesn’t hold anything against the team.
“They didn’t make the rule. But I guess to do certain stuff, to work, I guess you don’t own your body. That’s what it comes down to. If you want to work in society today, then I guess they made the rules of what goes in your body and what you do. Hopefully, there’s a lot of people out there that are stronger than me and keep fighting, stand for what they believe, and hopefully, it works out for them.”
Last week at Warriors’ media day, when asked about his stance on vaccinations, the 26-year-old said he was going to “keep fighting for what I believe and for what I believe is right … What’s right to one person isn’t right to the other and vice versa.”
Wiggins also said that no one in his family is vaccinated.
“It’s not really something we believe in as a family,” he said. “They know that I had to. It came down to get the vaccination or don’t play basketball. I’m 26. I have two kids. I want more kids. I’m trying to do something that will generate as much money as I can for my kids and my future kids, trying to make generational wealth. So, I took the gamble, took the risk, and hopefully, like I said, I’m good.”
Visit CNN.com/sport for more news, features, and videos
If NBA players are not vaccinated, they shouldn’t be on the team, basketball Hall of Famer Kareem Abdul-Jabbar told Rolling Stone.
“The NBA should insist that all players and staff are vaccinated or remove them from the team,” said Abdul-Jabbar.
“There is no room for players who are willing to risk the health and lives of their teammates, the staff and the fans simply because they are unable to grasp the seriousness of the situation or do the necessary research.”
Golden State next preseason game is at home against the Denver Nuggets on Wednesday.

More New Notes to be Available from Aug 27

Celebrities Who Should Consider a Writing Career

We use cookies on our website to give you the most relevant experience by remembering your preferences and repeat visits. By clicking “Accept All”, you consent to the use of ALL the cookies. However, you may visit "Cookie Settings" to provide a controlled consent.
Cookie SettingsAccept All
Manage consent

This website uses cookies to improve your experience while you navigate through the website. Out of these, the cookies that are categorized as necessary are stored on your browser as they are essential for the working of basic functionalities of the website. We also use third-party cookies that help us analyze and understand how you use this website. These cookies will be stored in your browser only with your consent. You also have the option to opt-out of these cookies. But opting out of some of these cookies may affect your browsing experience.
Necessary Always Enabled
Necessary cookies are absolutely essential for the website to function properly. These cookies ensure basic functionalities and security features of the website, anonymously.
Functional
Functional cookies help to perform certain functionalities like sharing the content of the website on social media platforms, collect feedbacks, and other third-party features.
Performance
Performance cookies are used to understand and analyze the key performance indexes of the website which helps in delivering a better user experience for the visitors.
Analytics
Analytical cookies are used to understand how visitors interact with the website. These cookies help provide information on metrics the number of visitors, bounce rate, traffic source, etc.
Advertisement
Advertisement cookies are used to provide visitors with relevant ads and marketing campaigns. These cookies track visitors across websites and collect information to provide customized ads.
Others
Other uncategorized cookies are those that are being analyzed and have not been classified into a category as yet.
SAVE & ACCEPT